Beau Baron returned to Glen Helen Raceway in Devore, CA for round two of the WORCS Series. He scored a victory in ATV racing and a fourth-place finish in his SXS. He currently leads the Pro ATV points with his second consecutive victory.

The course was typical Glen Helen, but it lacked a pro section or any technical sections. That didn’t tone down the action, though. After ripping out of the gate, Baron had to hold off several competitors to get the victory.

“I gated perfectly today and tried to put a gap on these guys, but Roberto stayed close and Stephens and Travis all hung tight,” said Baron. “The Sparks engine ripped right off of the start and the CST tires grabbed traction. Doug Roll and I have been working on my suspension and it was awesome. The Elka shocks, Roll Design arms, and the JB swingarm are a great combination.”

With several young guns in the ATV field, Baron has to work harder than ever to keep his spot in front. The defending Pro ATV Champion may be into his 40s, but he still knows a few tricks the new guys haven’t yet learned.

“I’m no spring chicken at 41, and I did enough to get the win and I’m happy with my performance,” said Baron. “There are a lot of fast guys there, and they are all doing their best to take me down, so it’s hard work.”

In Pro Production SXS, Baron got a great start, but the track took its toll on the field. Running a conservative pace at first, Baron sped up as the race ran, but his machine suffered a failure on lap four. With lots of the carnage throughout the field, Baron was able to maintain a conservative pace for the remaining laps and still earned a fourth-place finish.

“I was ripping around really well and I was super comfortable,” said Baron. “I knew if I could keep my car together, I would have a great race. I was a little timid at first, but I laid into it four laps in and had a mechanical issue. I was limping around the track. The race was chaos so I’ll take the fourth.”

Baron will return to action when WORCS heads next to Lake Havasu City, AZ for round three, scheduled for March 4-6. 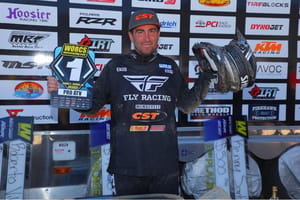 © 2021, Elka Suspension Inc, v3.0. All rights reserved. All contents is subject to copyright laws and is the sole property of Elka Suspension. Unauthorized reproduction is prohibited.    |    Privacy Policy