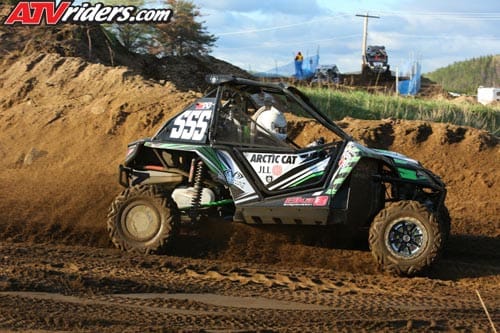 The 12th annual 12 hours of La Tuque doubled it’s SxS entries this year with 22 vehicles on the starting line! There were four divisions for the Side-by-Sides; the Open 851-1000, Stock 851-1000, Open 600-850, and Stock 600-850 class. The format for the SxS racing was a little different than the ATV races. The SxS classes only ran two 1-hour heats; with one on Saturday evening and the other on Sunday morning. The course was also shorter, with about 2 minute lap times, but did incorporate some of the ATV course as well, which also included some very rough sandy conditions. Luckily, workers groomed the track in between each session.

In the Open 851-1000cc class, Team rider Yani Desjardins claimed the win in Moto 1 and finished in 2nd place in the moto 2 for a 2nd place overall. His Can Am Maverick Stage 5 equipped made it to the checkered with a total of 68 laps. Diane Rossi, one of the only female driver of the race came in 3rd place! Way to go lady!

Published On: May 28th, 2014Categories: Uncategorized
Previous
Next

© 2021, Elka Suspension Inc, v3.0. All rights reserved. All contents is subject to copyright laws and is the sole property of Elka Suspension. Unauthorized reproduction is prohibited.    |    Privacy Policy